The question of native versus non-native species is often complicated.  For example, salt cedar (tamarisk) is an invasive species that is the target of widespread eradication efforts, yet it has also become a favorite habitat of the endangered southwest willow flycatcher.  Climate change impacts will only heighten that complexity as some native species fail to adapt and non-native species fill their ecological niche.   Nevertheless, Amigos Bravos has a policy of conserving and restoring native species and working to develop policies and practices that aid adaptation to climate change.

The Rio Grande cutthroat trout (Oncorhynchus clarki virginalis), a member of the family Salmonidae, is found in northern New Mexico and southern Colorado in tributaries of the Rio Grande. See below for a detailed range map. 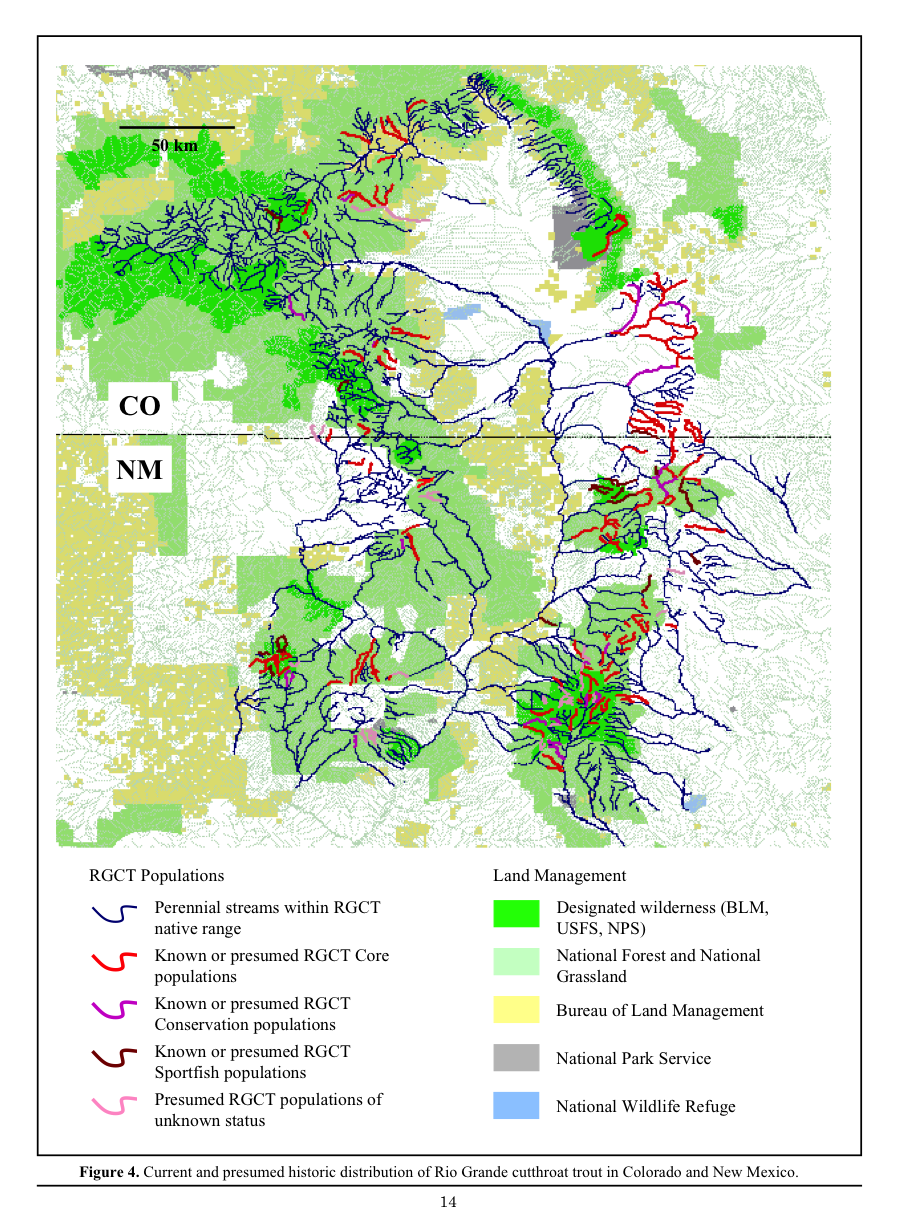 In New Mexico, Rio Grande cutthroats occupy just 10% of their historical range. This reduction is due to a combination of factors including: water diversions, stream drying, dams, habitat degredation, changes in hydridization with rainbow trout, or competition with brown and brook trout. According to U.S. Fish and Wildlife Service, 13 core populations remain in the wild. These are the key to the survival of the species. Four of the 13 core populations are located in the Santa Fe National Forest. The Rio Grande cutthroat trout is currently a candidate for listing under the Endangered Species Act.

For detailed information on this species, read the 2004 click here.

Amigos Bravos has been instrumental in the formation and work of New Mexico Friends of River Otters, which is reintroducing the river otter to New Mexico.  If you believe that you have seen an otter or otter sign - we want to know about it! To download a river otter observation sheet to record the details of your sighting please click here.

If you are a teacher or student interested in our River Otter Curiculum developed in 2013, please click here.

The North American river otter (Lontra canadensis) is a large and strong semi-aquatic mammal in the weasel family. Highly social, playful, and possessing seemingly unlimited energy, they are a joyful sight to the lucky observer.

Otters are more at home in the water than out of it, using water for hunting, frolicking, traveling, and as a refuge from danger.  They thrive on a diet of crayfish, fish, and insects. Their lithe, streamlined shape, powerful tails, and webbed feet make river otters expert swimmers and divers.  Dense, glossy brown fur, with long guard hairs, keep them warm and dry in icy winter waters.

For thousands of years, river otters were a part of the natural environment of what is now New Mexico. As an animal at the top of the food chain otters played an important role in the aquatic habitat of rivers and streams by helping maintain the balance of native fish and other species.  Otters were once abundant enough in the rivers and streams of New Mexico to have been documented many times in the diaries and journals of early travelers in the region.  Historical reports indicate that river otters were present in the Gila River, the upper, and middle Rio Grande, the Canadian River, and possibly the San Juan River.  Pollution, deforestation and unregulated trapping caused their decline and eventual disappearance from New Mexico.

New Mexico Friends of River Otters is a critical mass of community-based environmental and wildlife organizations, representative State and Federal agencies, and a scientific advisory panel, dedicated to the successful restoration of river otters to New Mexico’s waters.  Amigos Bravos is a founding member. Extirpated from New Mexico since 1953, the river otter is viewed as an umbrella species indicative of the health and integrity of communities associated with streams and rivers.  Through an integrated approach focusing concurrently on the scientific/biological basis of reintroduction (through surveys and habitat mapping and the drafting of restoration strategies and planning documents) and an educational component (targeted workshops, educational materials, and outreach efforts to gain stakeholder and decision-maker support) the project aims to replicate successful restoration projects in neighboring states of Arizona, Colorado, and Utah.

33 river otters were reintroduced to the Upper Rio Grande between 2008 and 2010, after a 60–year absence.  The wild otters were captured and transported from Washington State by USDA Wildlife Services and Taos Pueblo as part of a larger otter reintroduction program organized by the New Mexico Department of Game and Fish, Taos Pueblo, the U.S. Bureau of Land Management, and the New Mexico Friends of River Otters. For a video of our river otter re-introduction, please see the following link: uploads/fck//file/river_otter_movie.mov

After this successful project, the next goal of the Friends of River Otters was to re-introduce river otters to the Gila River. Unfortunately, these plans have been put to a stop by the New Mexico Game and Fish Department.  Please see the news article to the right for more information on this troubling development.

Help Us Monitor the River Otters!

Amigos Bravos and other members of New Mexico Friends of River Otters are working with volunteers to do otter monitoring in the Upper Rio Grande watershed.  A Volunteer Otter Monitoring Training was held in 2009, and each spring, a presentation is giving to river rafting guides in the area in order to educate them on River Otters and the importance of reporting sitings.  To download a copy of the protocols for otter monitoring and guidance on how to identify otter tracks and scat please click here. Rachel Conn from Amigos Bravos appeared in a video about the river otter reintroduction effort on the Albuquerque Journal website.

In an effort to monitor the progress of the river otter re-introduction in the Upper Rio Grande, Amigos Bravos placed our first "River Camera" near John Dunn Bridge on January 28th, 2016. We “caught” our first otters playing at night on January 29th, 2016. We continue to see river otters at this location, and frequently see a group of 3-4. We have also seen bighorn sheep, a ringtail cat, a bobcat, a coyote, raccoons, and geese at this location. We deployed a second River Camera on February 13th, 2016 on the Rio Grande near Rinconada. This camera frequently “catches” a beaver family and raccoons. River otters have been "caught" once at this location by our camera. We have also seen wood ducks, geese, other birds, muskrat, and bobcat there. The cameras are motion activated and snap 3 pictures every 30 seconds when they are triggered by movement. Amigos Bravos plans to expand this monitoring program on the Rio Grande with more cameras, and to survey the San Juan for signs of river otter this summer. Like us on Facebook and visit this page frequently to see the new River Camera pictures as they are collected.

To learn more about food habits of the river otter, see Food Habits of the North American River Otter (Lontra canadensis) (84KB pdf), prepared in 2003 by Heidi Hansen, graduate student in the Department of Zoology and Physiology at the University of Wyoming, and the Abstract on Food Habits (40KB pdf), prepared by Jon Klingel of the New Mexico Friends of River Otters.

Amigos Bravos Board member Jon Klingel has helped us research and develop an internal policy (52 KB pdf) urging caution in the use of Fintrol, a chemical agent used to kill non-native fish in an effort to restore native fish populations.

The disappearance of the Río Grande silvery minnow is a critical indicator of a collapsed natural system.  The demise of the sole remaining native minnow species is – like the canary in the mine – a signal of imminent danger posed by development and river management trends.  By acting to save the Río Grande silvery minnow, we may well be saving the health, social fabric, and economic sustainability of all communities in the middle Río Grande valley.

The Río Grande Silvery Minnow was listed for protection under the Endangered Species Act in 1994.

Amigos Bravos was part of the U.S Fish and Wildlife Service's team that developed the Rio Grande Silvery Minnow Recovery Plan.  Finalized on July 8, 1999, the Plan was revised in 2010. Amigos Bravos was represented in the revision process by John Pittenger of Blue Earth Consultants.

For more information on the court case history of the Rio Grande Silvery Minnow, see Judge Parker's landmark decision in the case

The most current news for the Rio Grande Silvery Minnow is unsettling.  As New Mexico heads into it's fourth year of drought, the river is unlikely to meet the demands of target flows for the minnow.  Please see the news article to the left for more information on this dismal prediction.