New Mexico’s revenue distribution scheme returns the lowest proportion of oil and? natural gas revenue—six percent—to local government in the Intermountain West. Local governments receive no production taxes or royalty payments, and instead rely on property and sales tax revenue from oil and natural gas activity. This small share of energy revenue may mean that municipal and county governments in New Mexico do not have the resources they need to deal with the impacts of extraction activities on local services such as roads, public safety, and social services. 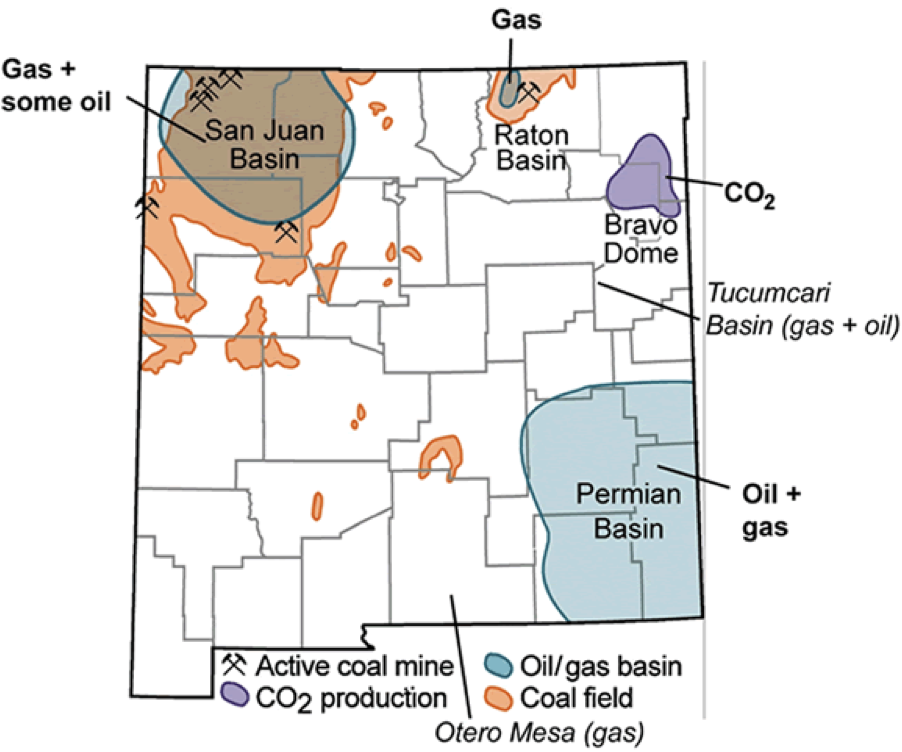 For a detailed and interactive map of non-renewable energy development in NM, please visit http://www.wrsc.org/story/new-mexico-maps

Introduction:
Geologic formations may contain large quantities of oil or gas, but have a poor flow rate due to low permeability, or from damage or clogging of the formation during drilling. This is particularly true for tight sands, shales and coalbed methane formations.

Hydraulic fracturing (aka fracking) stimulates wells drilled into these formations, making profitable otherwise prohibitively expensive extraction. Within the past decade, the combination of hydraulic fracturing with horizontal drilling has opened up shale deposits across the country and brought large-scale natural gas drilling to new regions.

The fracking process occurs after a well has been drilled and steel pipe (casing) has been inserted in the well bore. The casing is perforated within the target zones that contain oil or gas, so that when the fracturing fluid is injected into the well it flows through the perforations into the target zones. Eventually, the target formation will not be able to absorb the fluid as quickly as it is being injected. At this point, the pressure created causes the formation to crack or fracture. Once the fractures have been created, injection ceases and the fracturing fluids begin to flow back to the surface.

Materials called proppants (e.g., usually sand or ceramic beads), which were injected as part of the frac fluid mixture, remain in the target formation to hold open the fractures. Typically, a mixture of water, proppants and chemicals is pumped into the rock or coal formation. There are, however, other ways to fracture wells. Sometimes fractures are created by injecting gases such as propane or nitrogen, and sometimes acidizing occurs simultaneously with fracturing. Acidizing involves pumping acid (usually hydrochloric acid), into the formation to dissolve some of the rock material to clean out pores and enable gas and fluid to flows more readily into the well. Some studies have shown that more than 90% of fracking fluids may remain underground. Used fracturing fluids that return to the surface are often referred to as flowback, and these wastes are typically stored in open pits or tanks at the well site prior to disposal. - See more at: http://www.earthworksaction.org/issues/detail/hydraulic_fracturing_101#.VRR1H5PF9U8
Source: Earthworks Hydraulic Fracturing 101

In the San Juan Basin, there is a gas shale play called the Lewis Shale. It covers over 1,100 square miles and is estimated to contain 96 Tcf of gas. Lewis wells are not very lucrative by themselves but when other pay zones are added results can be quite good. For more information on fracking in New Mexico, please visit: http://earthjustice.org/features/campaigns/new-mexico-and-fracking

Deferral of Oil and Gas Lease near Cebolla, NM - The Bureau of Land Management Taos Field Office announced the deferral of 16 parcels encompassing 13,300 acres of public lands near Cebolla, New Mexico, from the October 2014 oil and gas lease sale, instead of opting to conduct additional analysis.

The Western Environmental Law Center (WELC) and Amigos Bravos submitted extensive comments to the agency identifying serious detrimental impacts on the community’s drinking water, as well as to air quality and the climate if these public lands are fracked for oil and gas. The groups specifically noted the area’s critical role as headwaters to the Rio Grande, as well as the fact that the shale formation where the drilling would occur lies perilously above the groundwater aquifer.